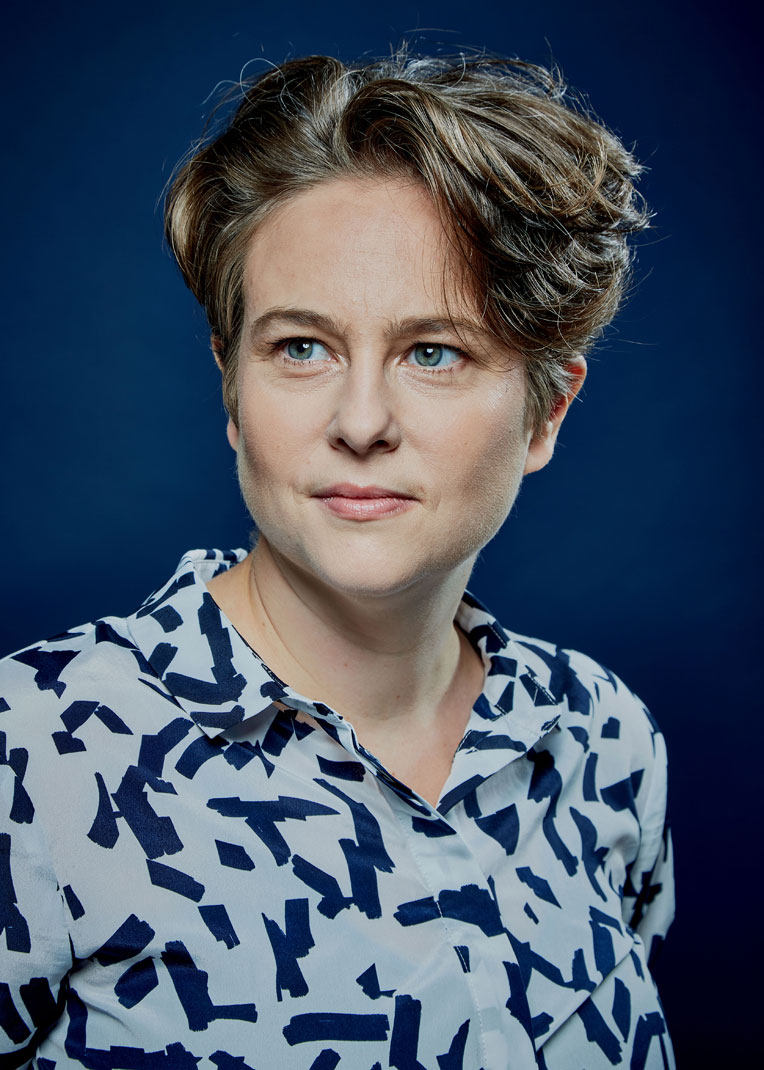 Emily Howard's distinctive music is notable for its granular use of instrumental colour, powerful word-setting and inventive connections with mathematical shapes and processes.

Howard (b. 1979) first won critical acclaim with Magnetite, commissioned for the Royal Liverpool Philharmonic Orchestra and Vasily Petrenko, to mark Liverpool's recognition as a European Capital of Culture in 2008. (The work is the title track on NMC's composer portrait disc, a collection that BBC Radio 3's Record Review noted 'brilliantly articulates' scientific ideas.) Howard – a Liverpudlian herself – went on to win an award from the Paul Hamlyn Foundation that year, and her work has since been performed all over the world.

Antisphere – the latest addition to Howard's ongoing series of orchestral geometries – was commissioned by the Barbican for Sir Simon Rattle and the London Symphony Orchestra (LSO), and opened the 2019-20 season. That same year The Anvil: An Elegy for Peterloo, for orchestra, chorus and soloists with a text by Michael Symmons Roberts, was performed by Kate Royal, Christopher Purves, three Hallé Choirs, the BBC Singers and BBC Philharmonic under Ben Gernon at the Manchester International Festival, who described Howard as one of British music's 'most original voices'. The Times praised Howard’s 'ferocious skills' and 'instrumental panache'.

Howard's music was also the subject of the Barbican's high-profile Life Rewired season in 2019, which explored artistic responses to society and technology. Alongside performances of Torus – a 2016 BBC Proms commission, described by the Times as 'visionary' and winner of the orchestral category of the 2017 British Composer Awards – and Threnos (performed respectively by the BBC Symphony Orchestra under Martyn Brabbins, and the BBC Singers), Howard curated 'Ada Lovelace: Imagining the Analytical Engine', an evening of new music and discussion in honour of mathematician Ada Lovelace. The event included the world premiere of a newly commissioned setting of Lovelace’s own text ‘But then, what are these numbers?’ (mezzo Marta Fontanals-Simmons, Britten Sinfonia and William Cole).

Howard composed her first full-length opera, To See The Invisible, an Aldeburgh Festival commission with a text by Selma Dimitrijevic after a short sci-fi story by Robert Silverberg, as part of her residency at the 2018 Aldeburgh Festival. The Telegraph remarked that the opera demonstrated that 'Howard’s idiom has a cool confidence and clarity of its own' while the Times observed that the achievement 'raised hopes for Howard’s future work'.

Four Musical Proofs and a Conjecture, a collaboration with mathematician Marcus du Sautoy and the Piatti String Quartet premiered at the New Scientist Live Festival in 2017 while in Germany, sphere received its first performance by the Bamberger Symphoniker conducted by Alondra de la Parra. In 2015, Howard’s string quartet Afference was premiered at Wigmore Hall and Leviathan received an outing at Huddersfield Contemporary Music Festival.

In 2010, the London Symphony Orchestra (LSO) commissioned Solar, a work that the Financial Times praised for its ability 'to suggest galactic power on a compact scale'. Solar was taken up by the West Australian Symphony orchestra for its Australian premiere in 2013, and had a further performance by the BBC Symphony Orchestra. In 2011, Howard's work was the focus of music festival Wien Modern, which saw performances of Magnetite in the Musikverein (by the Tonkünstler Orchestra under Andrés Orozco-Estrada), Solar and Calculus of the Nervous System in the Wiener Konzerthaus (performed by the Vienna Radio Symphony Orchestra with Sir James MacMillan).

Meanwhile, Howard continued to explore musical wordplay and wrote the operatic biopic Zátopek!, commissioned by Second Movement as part of New Music 20x12 for the 2012 London Cultural Olympiad, and the Ada sketches, premiered at the Royal Opera House's Linbury Theatre. In the same year, Mesmerism, a Diamond Jubilee commission for the Liverpool Mozart Orchestra with pianist Alexandra Dariescu, won a British Composer Award.

Having grown up with a dual passion for both notes and numbers, Howard embarked upon an undergraduate degree in mathematics and computer science at Oxford University before focusing her post-graduate studies on music. She studied composition at the RNCM (MMus) and the University of Manchester (PhD). Howard's commitment to creating collaborative opportunities for mathematicians, scientists and musicians is exemplified in the recent establishment of PRiSM, RNCM's Centre for Practice & Research in Science & Music, co-founded by the composer. In addition to her role as Director of PRiSM, Howard is also Professor of Composition at the RNCM, where she has taught since 2010. In 2019, Howard was a TORCH visiting research fellow at the University of Oxford and was elected honorary fellow of Oxford's Lincoln College in the same year.

Howard is based in Manchester and is represented by Cathy Nelson Artists & Projects. All works are published by Edition Peters.